The green heart of Italy: Umbria 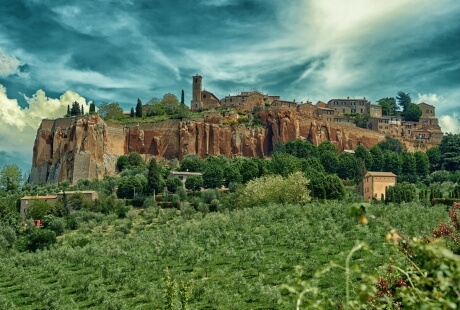 Travel experiences in Umbria are a combination of the cerebral and the sensual, from a plethora of art and architecture – sublime Renaissance paintings and glorious, honey-stoned churches and cathedrals – to excellent regional food and wine and the simple pleasures of wandering around medieval streets or through beautiful pastoral countryside.

Better still, you can enjoy variations of these experiences in all of Umbria’s many historic towns – all have one or more superb restaurants, say, or a wonderful little art gallery – as well as finding individual events, such as Spoleto’s annual arts festival, which are among the most renowned of their kind in Italy and beyond. 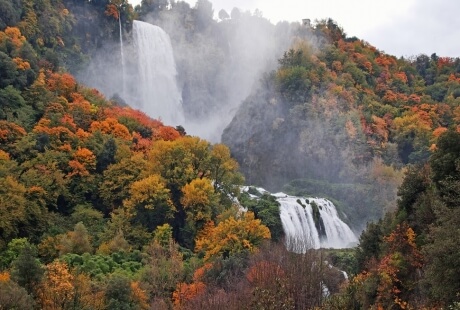 Shades of auburn. Autumn in Umbria

Surely if you are labelled as “the green heart of Italy”, passion, enthusiasm, long-standing traditions and vigour are part and parcel of your essence. In addition to delightful landscapes, gentle rolling hills, renowned gourmet delights and exquisite wines, Umbria is dotted with several exceptional hill-towns, each of them resolutely individual and crammed with artistic and architectural treasures so rich as to rival more famous neighbouring cities.

Discerning travellers will discover that Umbria, truly and simply, answers all their prayers: the typical warm Italian hospitality, seasoned with genuine, sublime food and wine, topped off with sublime art, and all this far from the madding crowds.

In autumn, all this comes on fire with trees turning vibrant shades of yellow, red and orange, haze enveloping the valleys and hills, adding a subtle aura, sensed everywhere. 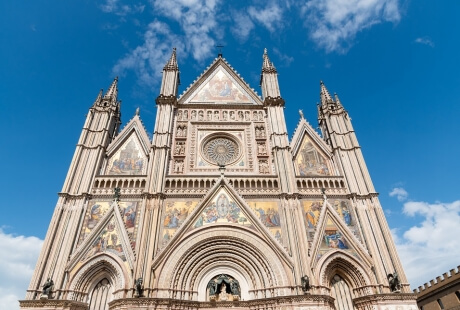 Saints and art: searching for the real Umbrian identity

Historically, Umbria is perhaps best known as the birthplace of two famous saints: Saint Benedict from Norcia and Saint Francis of Assisi, the patron of Italy. Often referred to as “the land of saints”, you will sense that Umbrian light, a silvery haze that hangs over the gentle curves of the land, combined with the soothing silence, adds a sense of sacredness to the region. Many visitors flock to UNESCO Heritage Site Assisi to admire the unique fresco cycles by Giotto and Cimabue in the Upper Basilica, superb Trecento cycles in the Lower one and to have a real sense of Christianity. Other minor towns, however, retain as much spell, such as charming Gubbio. Quintessentially medieval, its Corsa dei Ceri, held on May 15, is an astonishing parade whose exuberance and bizarre pageantry is only matched by the Palio in Siena. Spoleto is equally captivating and delightful, featuring a scenic setting, fabulous Romanesque churches and boasting a world-famous music summer Festival – the Festival dei due mondi. If you pass by Orvieto, its Duomo will stun you. One of the greatest Gothic buildings in Italy, its façade is a star turning and a triumph of columns, spires, sculptures, blended with an overpowering use of colour. Inside, the Last Judgement cycle in the Saint Brizio chapel is Luca Signorelli’s masterpiece and is said to rival even Michelangelo’s Sistine Chapel in impact and drama.  Medieval and pink-stoned, Spello is quaint and charming, its walls and three gateways the most obvious Roman remnants and its fresco cycle by Pinturicchio in the Baglioni Chapel in Santa Maria Maggiore a jewel. Perugia, the provincial capital, retains a picturesque medieval centre and houses the exquisite Galleria Nazionale dell’Umbria. Among central Italy’s most prestigious galleries, it takes you on a whistle stop tour of Umbrian painting, the most famous artist being Perugino.

The famous Baci pralines were first produced here in 1922 and a yearly chocolate festival – Eurochocolate – will satisfy even the sweetest tooth. Umbria Jazz, Italy’s foremost jazz events, takes place here every summer: its line-up is so rich and varied that visitors come from all over the world to see talented artists

And that’s not all! Bevagna, Foligno, Todi, Gualdo Tadino, Colfiorito… the list goes on and on in a maze of tranquil, proud, picturesque and simply beautiful places, best discovered when the subtle autumn light swathes each and every thing. 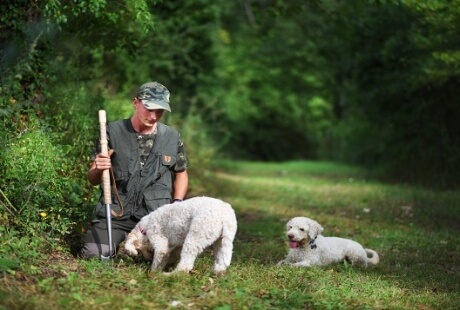 Truffles, grapes and spices: a wealth of riches

Before Stendhal reaches you and you feel you are spoilt for choice, with so much art and appealing towns to choose from, Umbria comes up with another striking ace up its sleeve: its simply unique food and wine delicacies. Wherever you go in Italy, you will find regional excellences that are hard to resist, but Umbrians are particularly proud of their outstanding products. Autumn is harvest time and the best moment to savour excellent Sagrantino DOCG and Rosso di Montefalco DOC. Known as “the balcony of Umbria” in view of its staggering views and hosting a splendid fresco cycle by Benozzo Gozzoli, the wine produced in Montefalco employs a grape found nowhere else in Europe that grants a strong, blackberry-flavoured taste.  The Grechetto from Assisi and the Orvieto white wine are also outstanding alternatives, but if you fancy beer, instead, you will find more than thirty artisanal varieties in the region. Local gourmet delights include world famous truffles, their perfumed shavings employed in several dishes, while saffron is grown in Città della Pieve, close to Perugia. The yearly Zafferiamo festival, held here in the autumn, celebrates the golden spice. What about olive oil? Intense, dark, with a peppery flavour, the Umbrian variety is simply worth the accolades. Pulses are the staple of cucina povera, the traditional Umbrian cuisine and the lentils from Castelluccio are just divine. Cured meats are also exceptional, Norcia being at the forefront of all things meaty and a gastronomic heaven. In the heart of the Valnerina, on the edge of the Sibillini National Park, you will be lost for words after having tried some prosciutto in one of the many ristoranti.

If you want your travel experience to be a combination of the intellectual and the sensual, look no further, Umbria is the place to be.

Ask for more info about the best accomodation and experiences
marketing@claudiadarin.it