Fall in Love with Tuscany

Where wine growing is an art 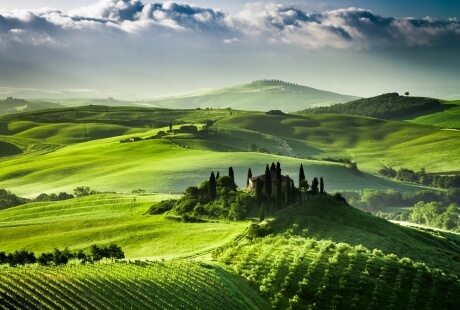 Tuscany is undoubtedly one of the most beautiful regions in Italy, perhaps the one revealing the greatest impact on Italian and European cultures. With its medieval villages set amid unparalleled vineyards, art-rich cities, swathes of olive groves, prized truffles, sublime cuisine and world-famous fashion houses” (Gucci and Ferragamo, to name a few), Tuscany epitomizes la vera Italia.

A place that thrills visitors so much that they come back again and again... Discover the many reasons why you’ll fall in love with Tuscany. 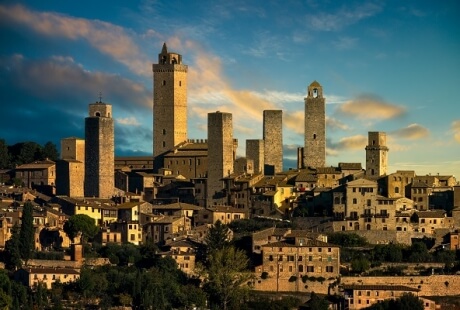 On the wine trails in Tuscany

Conjuring up images of picture-postcard wheat-field valleys and cypress-lined hills, ethereal light and world-class art, Tuscany is, to most visitors, a dream come true. Medieval hill-towns proudly defending their past, sensational cuisine that nourishes the soul and, of course, unforgettable wine experiences. One of the most important regions in Italy when it comes to ottimo vino, Tuscany is famous for red wines, which make up 70% of its wine production, although white wines such as the Vernaccia di San Gimignano recently acquired importance and hold the flag of Tuscany high, as a symbol of oenology in Italy. With 6 DOCG areas - Brunello di Montalcino, Carmignano, Chianti, Chianti Classico, Vernaccia di San Gimignano and Vino Nobile di Montepulciano, and 35 DOC areas, plus 60,000 hectares of wine production at its disposal, combined with a meticulous attention to tradition and procedures, you can be sure the Tuscan wine you are drinking has a long, gripping story to tell. 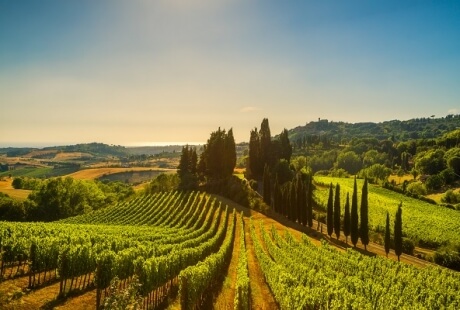 Tracking the past: wine in Tuscan history

Tuscany’s rich and varied heritage is the product of a strong economy which laid its basis on trade. In addition to wool and precious artifacts, wine, too, was sold in markets; the first recorded evidence of wine trading in the Mercato Vecchio in Florence dates back to 1079, although the Etruscans are known to have been keen wine growers.

Over the centuries, wine became such a pivotal trading good that the Arte dei Vinattieri  (Winemakers’ Guild) was created in 1282. Several wine-making families have their roots in Mediaeval times, such as the Antinoris, who started producing wine in 1385 and are still going strong today, after 26 generations. Surely Tuscany acts as a role model when it comes to gourmet options! 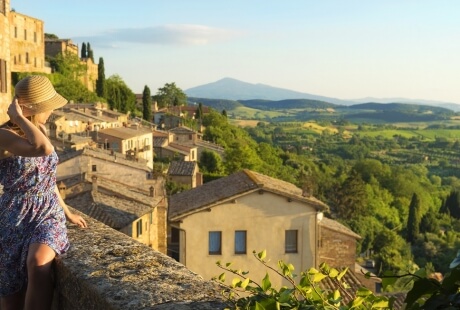 Brunello, Chianti, Montepulciano and all that jazz

“Worth the wait” may best define Brunello di Montalcino, considered the best wine in Italy by some wine critics. It must age for five years, two of which must take place in oak barrels; there have to be at least four months of refinement in bottles – these rise to six months for the Riserva type, which goes on the market a year later. This means that a minimum of 5 years need to pass between the harvest and the end product (6 for the Riserva): that’s the price you will have to pay for a divine taste. Brunello is produced only in the area close to Montalcino with only one grape, Sangiovese Grosso, called Brunello in this region, hence the name. Ferruccio Biondi Santi, together the clever intuitions of his granddad Clemente Santi, invented this winning formula in 1888: he left out the grape varieties used for Chianti, such as Canaiolo and Colorino, and only employed Sangiovese, leading to the winning recipe we know today.

The first mention of Chianti is linked with the foundation of the Lega del Chianti in 1300, under the jurisdiction of Florence, and the famous Black Rooster was picked as the emblem – still a symbol of Chianti Classico today. This appellation denotes the traditional type of wine growing, while seven other Chianti varieties exist, mainly linked with the production areas, i.e. the hills around Pisa, Arezzo, Siena, Florence, Rufina, Montalbano and Montespertoli. Baron Bettino Ricasoli first invented the Chianti Classico recipe in 1872, which sees Sangiovese and Black Canaiolo as the main grapes, a small portion of White Malvasia and Tuscan Trebbiano. Some wine-growers add international grapes, like Cabernet Sauvignon or Merlot, and age the harvest in barrique barrels: these wines are called Supertuscans.

The Chianti is also the first wine-growing area in the world to have been legally defined and bordered: Grand Duke Cosimo III set its borders with an Act in 1716!

Granted the DOCG label in 1980, the Vino Nobile di Montepulciano is another ace up Tuscany’s sleeve. It is produced with the Prugnolo Gentile grape – the name the Sangiovese Grosso grape is called in the area – to which Canaiolo Nero and Mammolo or Colorino are added. Documented as early as 1500, Sante Lancerio, the bottler of Pope Paul III Farnese, praised its qualities in the mid 1550s, while the poet Francesco Redi defined it as the “King of Wines” in the 1650s. Tempted enough?

Wherever you go in Tuscany, you are bound to find superb wines, given the ideal hilly landscapes and the rich soil the region offers. Other valid alternatives are the Morellino di Scansano, produced with Sangiovese grapes, locally called Morellino, Carmignano DOCG from the Prato area, which employs Sangiovese, Canaiolo Nero, Cabernet Sauvignon and Cabernet Franc grapes; Aleatico Passito DOCG from the Elba Island, a dessert wine which exudes the flavours of this captivating island.

If you are a fan of white wines, do not miss the Vernaccia di San Gimignano, Bianco di Pitigliano, Bianco dell’Empolese, Costa dell’Argentario and the Colli di Luni, produced on the border with Liguria.

Ask for more info about the best accomodation and experiences