Five things not to miss in Naples 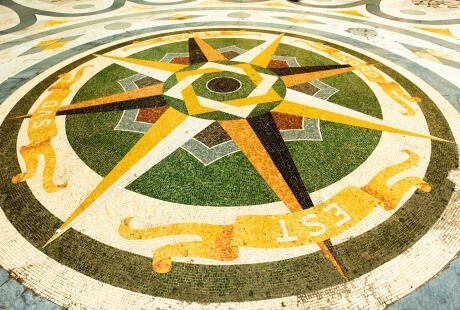 Fiery and loud, colourful and intriguing, many souls enliven Naples, a city bustling with raw energy, daring choices and hiding many unsuspected secrets. Impressive ancient art is combined with pioneering architecture, royal palaces and marble masterpieces live in unison with archaeological finds and lively streets paint a picture of a delightful buzz. Churches, sculptures, artisan workshops and world-renowned museums may make Naples an unsurpassed tourist hotspot, but an equally mesmerizing subterranean world, consisting of ancient streetscapes, eerie aqueducts and chambers enrich the city’s charm. Founded by the Greeks and conquered by the Romans, then dominated by various dynasties, its various layers of history are sensed in the many styles that feature throughout the city. Naples is also, of course, pure heaven for your senses: visit once and you will never forget the delicious food that makes Neapolitans proud and gratified. Its magnificent setting on a wide, sparkling bay and the supreme natural wonders close-by are a prelude to an unforgettable journey, discovering the heart of a unique city 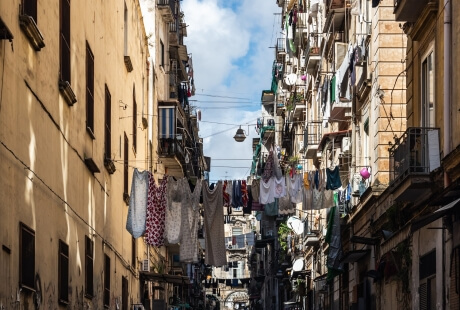 1. Explore the roads that enliven Naples

Naples boasts endless churches and refined museums, but it’s the streets you will want to head to, if you want to capture its essence. “Street theatre” unfolds in the city every day, its citizens animating its narrow, cobbled streets day and night, and this is nowhere more blatant that in the centro storico. A UNESCO World Heritage site since 1995, it illustrates two millennia of history, primarily its Greek roots – the city’s name, Neapolis, was given by them – followed by the Romans, and then the byzantine, the Normans, the masterpieces of the Renaissance, Baroques splendour up to contemporary, cutting-edge projects: a melting pot that runs along animated, sparkling streets. Dividing the historic centre from north to south, Spaccanapoli is an iconic, arrow-straight road bustling with activities, tourists, local shoppers, passers-by and honking vespas, giving a sense of the real Neapolitan atmosphere.

Lively piazzas, open-air cafes, historic churches and original shops are all found here. Via San Gregorio Armeno, close by, stuns for its endless collection of nativity scene shops, much loved by locals, who may put a statuette of local hero Totò alongside the Three Kings at their home presepe. Head to Via dei Tribunali for the most scrumptious pizza ever: did you know it was invented in Naples? You will find the typical fluffy, charred dough on any venue along this picturesque street where every meal is nothing short of delicious. Don’t forget to visit the lively markets, such as Porta Nolana, La Pignasecca or Sant’Antonio, in the buzzing Sanità and Capodimonte quarters: come face-to-face with real Neapolitan life and admire Baroque Palazzo dello Spagnolo,  Caravaggio’s The Seven Acts of Mercy (Pio Monte della Misericordia) and Santa Chiara’s monastic complex, a few of the gems that dot this exceptionally animated area. 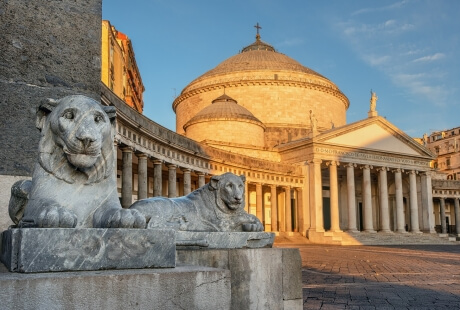 2. Be tempted to reach out to a marble statue

With its endless collection of museums, churches, monuments and artworks, Italy is second to none when it comes to possessing an immense heritage; Naples is no exception and you may spend a good time trawling through it masterpieces. If you were to choose only one artwork, however, it may well be Giuseppe Sammartino’s exquisite 1753 Cristo velato (Veiled Christ). Housed in the small Cappella Sansevero in Via De Sanctis in the historic centre, it was commissioned by the alchemist Prince Raimondo di Sangro, who is buried in the chapel. This mesmerizing sculpture defies our concept of three-dimensional sculpture, its thin marble veil covering the body of Christ being so real that you may want to reach out and sense its texture; some people even suggested that its alchemist patron had found a way to transform cloth into stone. Baroque creativity is also found in the chapel ceiling, adorned with a striking 1749 fresco depicting the Glory of Heaven, executed by Francesco Maria Russo with colours formulated by the Prince that are still vivid and intense. A floor labyrinth dating to c.1771, a mysterious underground chamber and various statues further adorn this small jewel. 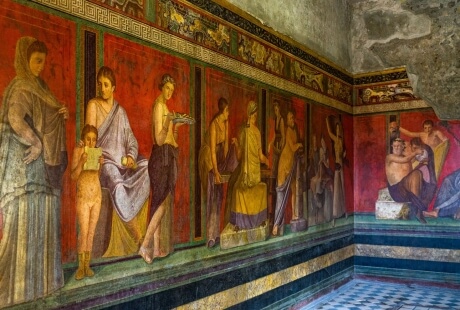 3. Visit one of the world’s best-kept archaeological museums

If you thought that archaeological museums mainly consisted of stuffy rooms full of fragmented antiquities with a mysterious origin, a visit to Naples’ Museo Archeologico Nazionale will be an eye-opener. Displaying a vast array of exquisite mosaics, statues, frescoes and numerous finds, this IS one of the world’s greatest collection of ancient treasures, the artworks it contains laying the basis for canons of western art. Be amazed at the Toro Farnese (Farnese Bull), the largest single sculpture from antiquity ever unearthed: a Roman copy of a Hellenistic sculpture, its dating is uncertain and, according to Pliny the Elder, it may have been executed in the II c. BC in Rodi: what is certain is that it was discovered at the Baths of Caracalla in Rome in 1545. Gaze in awe at the so-called Alexander Mosaic (aka the Battle of Isso), depicting Alexander the Great and the Persian King Darius III in the act of fighting. Found in Pompeii in 1831, the moasic adorned the Casa del Fauno and was executed in 100 BC: rich in dramatic details, in addition to the two protagonists, various soldiers and animals are depicted in what is a very emotional rendering of a momentous event.

Ancient frescoes, pottery and sculptures are hosted in great quantity – and superb quality – on the first floor of the museum, mainly stemming from Vesuvian villas and Pompeii: you will be amazed at how familiar most of these images will appear, as they are truly famous. Proving that art can stir a sensation, if you step into the Gabinetto Segreto (Secret Cabinet), you will be met with an impressive collection of erotica-themed artworks: some say this small, almost hidden room is the real draw of the entire collection. Time to go and see for yourself 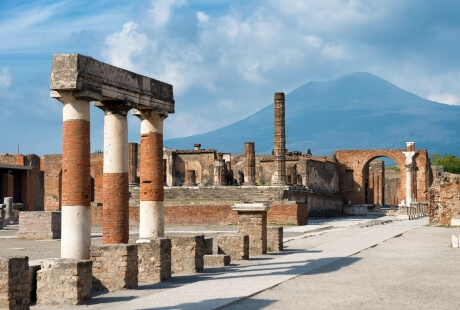 4. Track the mystery of Pompeii and Herculaneum

Pretty much like 1066 for the British Isles, 1492 for the Americas and 1789 for France, 79 AD is a date most Italians know, as it marked the eruption of Mount Vesuvius that entirely covered the city of Pompeii, burying it under fragments of burning pumice stone, exceptionally preserving it across the millennia. Campanian Oscans allegedly founded the surprisingly well-preserved city in the 7th c. AD: the town then fell to the Greeks, before becoming a Roman colony. The Architect Domenico Fontana came across the ruins of Pompeii in 1594 but excavations did not commence until much later, in 1748. Best enjoyed in the afternoon, walking around Pompeii is a dreamlike, extraordinary experience, where you can grasp the essence of an almost surreal city: from the Terme Suburbane (spas) to the Villa of Mysteries, the Casa del Fauno – Pompeii’s largest private house – to various theatres, more private villas and a market, along with roads and monuments, this is a de facto encounter with living history that has no equals anywhere in the world.

More than 2,000 people perished in the eruption, and you can see how they were caught by this night tragedy: bread left baking in the oven, people being found asleep and various ruins suggesting that the drama that unfolded came as a surprise.  Visit this UNESCO World Heritage Site (inscribed in 1997) alongside with Herculaneum, a Roman fishing town that suffered the same tragic destiny. A smaller affair, but equally captivating, you will find exciting archaeological finds, captivating mosaics, intriguing inscriptions, along with ancient spas, luxurious private houses (House of the Beautiful Courtyard, House of the Stags, and the House of the Mosaic Atrium) and exceptionally preserved furniture. You could also recreate ancient life at the nearby Virtual Archaeological Museum, for an immersive trip into Roman Pompeii, reconstruct the famous eruption or even virtually explore Capri and the splendour of Villa Jovis when the Roman Emperor Tiberius had it completed. 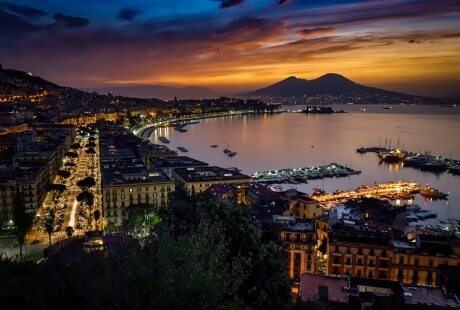 5. Walk on the lungomare and visit the Parco Virgiliano

A view that captured the imagination of numerous poets and artists, the Bay of Naples is simply breathtaking. Its nearly 3 km-long Lungomare (Via Francesco Caracciolo) unites the Mergellina to the Santa Lucia boroughs and is much loved by locals and tourists alike. Mount Vesuvius, protected by a National Park, clearly steals the scene, its imposing and menacing figure – don’t forget that it is an active volcano – a stark silhouette that has shaped the lifestyle of Neapolitans, happily living under its shadow. 12th century Castel dell’Ovo, on the Borgo Marinaro promontory, is the oldest castle in Naples. Legend has it that the Roman poet Virgil, who had written the Bucolics and the four Georgics books in Naples, hid an egg under the castle; this would guarantee the integrity of the small island and the entire city. Scholars agree, however, that the castle owes its name to its shape.

Views encompass Posillipo, a posh area dotted with elegant villas, panoramic roads going down to the sea, the tombs of the poets Giacomo Leopardi and Virgil, and the clifftop Pausilypon Park, in a superb panoramic position. It leads to major archaeological ruins including a Roman theatre, used for music and theatre performances in the summer, the ruins of Roman villas, an aqueduct and several other magical ancient structures. The site also includes the Parco Virgiliano, superbly set in a panoramic position overlooking the Bay of Naples, the Sorrento peninsula, the islands of Procida, Ischia and sublime Capri. Featuring lush vegetation, with olive trees, holm oaks, scented rosemary and myrtle, this is the ideal place to relax and unwind.

Walk on the Lungomare or visit the park at dusk for a romantic experience, when softly-tinted hues colour each and everything, giving the city that inspiring, stunning aura that has captured visitors aplenty across the centuries.

Travel Tips where to stay:

Ask for more info about the best experiences and itinereraries we can design in Naples, Capri and the Amlafi Coast