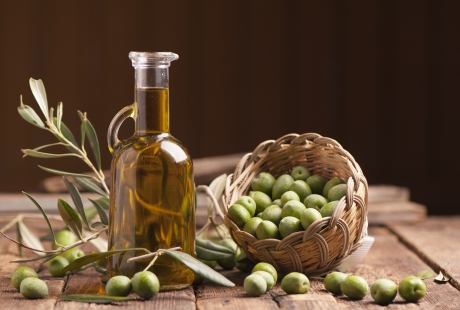 A blossoming you wouldn’t expect at such a latitude – beyond the 46th parallel - and yet the
Mediterranean climate found on Lake Garda favours the production of olive oil, grown here since antiquity. Arco, Riva del Garda and Tenno are members of the National City of Oil Association.
The olive oil produced here is mild and delicate with a fruity taste, ideal for the many local recipes;
its colour goes from marked to intense golden green, given the high chlorophyll content.
The Garda olive oil received the D.O.P. recognition from the European community and is thus highly
esteemed, so much so that the eastern shore of the lake is called Olive oil Riviera. If you are tempted to find out more about this most precious and vital ingredient, a staple in the healthy Mediterranean diet, you can visit the Olive Oil Museum in Cisano, not far from Lazise. Highly informative, you will get a glimpse on the production process of olive oil with several instruments on display. Add in a tasting and a well-stocked shop, selling other products made with oil, and you will have a thoroughly enjoyable experience. 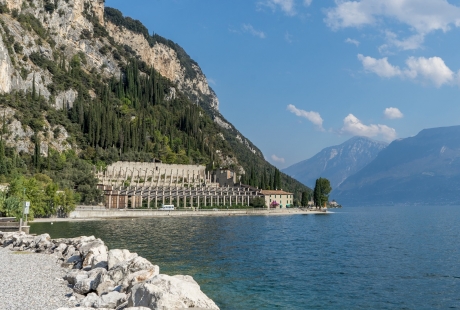 “Do you know the land where lemon trees blossom?” asks Goethe in his Travels in Italy, referring to lake Garda. Famous for the production of lemons and citrus fruits, the area between Limone and Toscolano hosts an array of limonaie (lemon houses), peculiar pillars backed against the rock, a testimony to the glorious past of a traditional activity. Popular ever since 1600 – although fruit farming seems to date from the Quattrocento - lemon houses were built in a tier system – each terrace being called còle. In addition to lemons, lemon flowers were produced, as well, given the extreme versatility of this prized fruit. The most famous limonaia is the Castél one in Limone sul Garda. Splendidly set in the old town, it has been restored, its glorious past aptly shown; several citrus fruits also grow here, such as cedars, tangerines, clementines and kumquats. 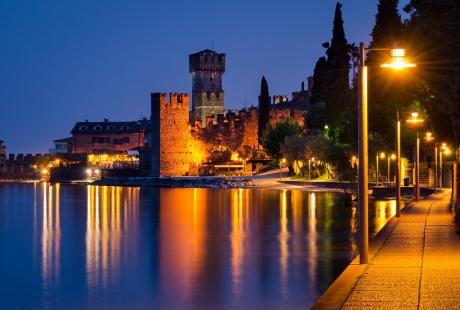 Populated since Roman times, Lake Garda is a treasure trove of adventure, marvelous landscape, delicious food and sublime castles. You will be surprised at the number of excellent fortifications you’ll encounter all along the shores. Among the many interesting ones, is surely worth a visit. Torri itself is one of the prettiest towns on the Veneto side of the lake, the castle still showing imposing ramparts as well as three towers. Sirmione is home to the fairy-tale Rocca Scaligera. In an excellent state of preservation, you will admire its courtyard, the dockyard - a rare case of a fortification for a harbour use - the evocative moat and the bravest may even catch a glimpse of a ghost during stormy nights! Lazise, once a major Venetian port, hosts a splendid IX century castle. Now privately owned, it changed hands over the centuries and you can visit the external fortified walls, built to protect the first Free Italian Municipality in the Middle Ages. Evocative Padenghe Castle, on the western shore of the lake, dominates the town from a hill and was probably built around 1145AD, with subsequent modifications over time. Visit this splendid castle – and the many other on the lake – and you will step back in time. 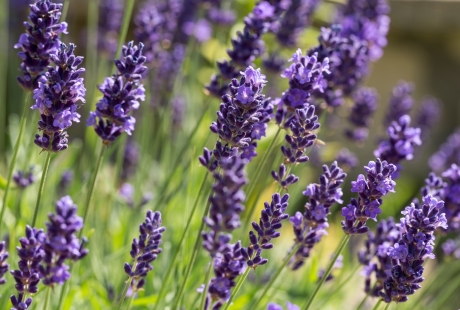 The fabulous and unexpected microclimate found on Lake Garda favours the growth of olive and lemon trees, making the landscape attractive and pleasing to the eye and the soul. What many people may not know, however, is that lavender grows on the morenic hills of the Brescia side of the lake. Organically produced, lavender is an exceptional flower, whose colour and scent is a treat for the soul. Liquors, jams, honey, candles and cosmetic products can be produced with it, creating an exceptional backdrop to walks and tours. Known since ancient times, lavender possesses undisputed calming and soothing properties for adults and children alike; it is also a natural antiseptic and bactericidal. Its colour is also considered the one of silence, contemplation and spirituality. 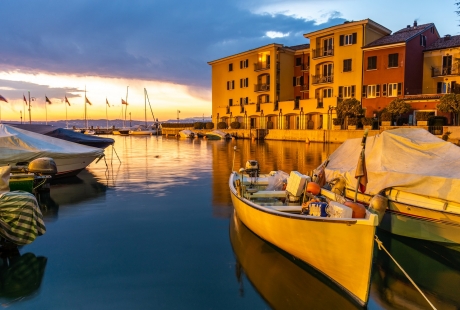 Water sports are so common on lake Garda that you can admire the boats easily cruising from one of the exceptional shore to the other. The lake boasts a staggering sixty five harbours – divided between private and regional ones. Up to nine different winds blow on the lake, being at their strongest in the north, hence the ban on motor boats in the Trentino-Alto Adige side; notwithstanding, waves can be fierce and dangerous in the south, too, especially when storms come in from the north and the waves feature fetch, accumulating energy. Among the many picturesque harbours, Gardone Riviera is surely of interest. Famous for the consistency of its climate, it also houses the most exotic botanic garden on the lake, the Heller Garden. Defined as “a centre of environmental awareness”, the garden hosts several works of art by the owner, the Austrian visual artist Andrè Heller, as well as a kaleidoscope of different cultures, religions and floral interests, in a perfect marriage between art and nature. From a mini-Dolomite landscape to water lilies floating on water, Zen-like corners and flowers from all over the world, the garden reinvents itself each season.

Travel Tips where to stay