5 Nuragic sites to visit in Sardinia

Ancient discoveries in a magic land: 5 Nuragic sites to visit in Sardinia

In an island that may well be a continent in its own right, Sardinia is no short of superlatives, in every domain. Lovely, sandy beaches where dips in bluer-than-blue waters come aplenty, natural landscapes that stretch from surprisingly lush forests and lovely lakes to fantastic outdoor opportunities with kayaking, climbing, cycling and hiking. It is in the inland, however, that this magic island reveals its real soul , that of a clever, imaginative and highly productive and proud population. It is true, in fact, that wowing and wondering at natural beauties in amazement is a game that comes naturally on this superb island, even more so when you take in all the exceptional archaeological finds that dot this region, starting from the exceptional Nuragic places.

Are you ready to time travel with us? 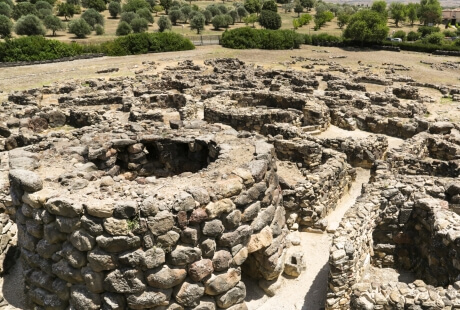 1. Barumini and its mighty past

The Nuragic Civilisation developed over a period of about 1,000 years –approximately 1500 to 500 BC – and established a very complex social structure; families belonged to various clans and the symbol of this civilisation are nuraghi (tower-fortresses). You can find as many as 7,000 of them dotted around the island, and one of the most famous is certainly Su Nuraxi de Baromini, close to Cagliari. The area was awarded a UNESCO World Heritage Site label in 1997 – the only Nuragic complex to receive such an award on the entire island – and it is striking as we can detect more than one tower in the ruins of this archaeological marvel.

Visual reconstructions of this place – built in the Bronze Age –  are outstanding and project the idea of what was, and still is, the largest and best preserved prehistoric site on the island. Watchtowers, congregation centres or ritual site: not much is known about the true purpose of these megalithic jewels, and yet they strike a chord in anyone’s imagination. Discovered by Giovanni Lillu, Sardinia’s most famous archaeologist in 1949, Su Nuraxi will stir strong emotions.

Pay a visit to nearby Casa Zapata, the ancient residence of Aragon barons (who had come to Sardinia in 1323), inside which you can see another Nuragic complex, Nuraxi  e’ Cresia. Surely worth a visit. 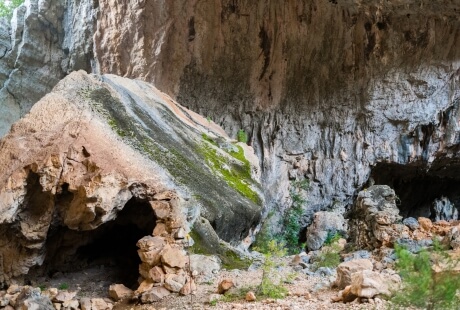 2. A riddle across time: Tiscali

The “enigma” that is considered to be Tiscali stuns and astonishes every visitor. Deep in the heart of Supramonte, historians have always struggled to establish the exact function of this hidden village, ever since its discovery in the 19th century. It was built along the walls of a depression in the Bronze Age as a defensive town and made up by three different villages, put together at different times; it was populated up to the Roman times and it is certainly one of Sardinia’s must-see archaeological sites. A two-hour hike is required to reach the village, and although not much is left of the actual hamlet, imagination runs wild in a supremely evocative place.

Find yourself wondering about the actual function of these ruins and play with history riddling with a superb civilisation that left such tangible marks across the island. While you are in the area, do not forget to visit the Serra Orrios complex and the Sedda ‘e sos Carros site, dedicated to the cult of water; the latter was used as a hiding place for local tribes from the Romans . Other nearby sites worth visiting are S’Abba Frisca, Serra Orrios, and the Corbeddu cave, where a 5,000-year-old queen was found. 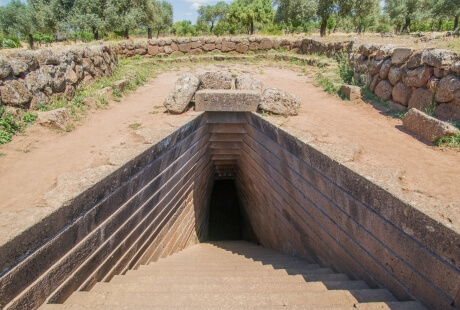 North of Oristano lies a surprising archaeological complex, among the best preserved in Sardinia. Water was – and still is – highly important and played a pivotal role in Nuragic religious traditions, hence the creation of several tempio a pozzo (well temples) on the island: the sacred well in Santa Cristina dates back to the late Bronze Age (11th to 9th century BC) and it is simply staggering.

It is accessible through a small entrance, via a series of superbly maintained steps: once you are at the bottom, you can gaze up at the tholos (conical tower). Every winter and summer equinox you can see the sun lighting up the stairway down to the well, unless you want to wait the 18 years, one month and two days for the moon to shine through the well! If you can visit the nearby early Christian Church of Santa Cristina, you can consider yourself lucky: it is in fact only open for twenty days a year, the ten days preceding Santa Cristina in May and another ten days before the feast of Saint Raphael the Archangel – in October.

The Nuraghe di Santa Cristina, to the other side of the village, features a 7-meter high tower that once symbolised the core of the entire community. All in all, the entire village oozes tranquillity, peace and a magic atmosphere of devotion, mingled with ancient traditions. 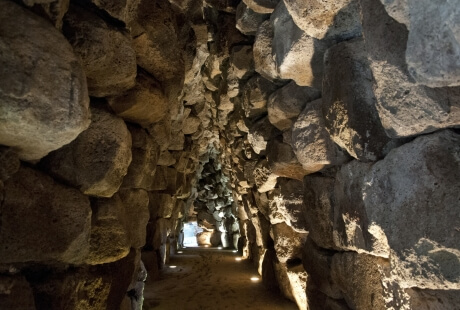 To the north of the island, Costa Smeralda is known the world over for its glitzy harbours, lovely coves, sparkling marine life and the jet set fighting for its place in the limelight. The area is however also rich in marvellous natural wonders, such as the Maddalena archipelago, and also mysterious archaeological finds that make the area highly interesting and fascinating.

The Temple of Malchittu dates back to 1500BC and it is highly original; although its function is unknown to experts, you can play a game of wondering about its function while you approach it via a picturesque trail.

Another scenic trail leads to the La Prisgiona ancient Nuragic village, one of the most extensive to the north of the island, made up by a main keep and two side towers. The Li Muri necropolis is made up by four interlocking megalithic burial grounds and, it would appear, the rectangular stone tombs were reserved for Very Important People back in the day. Another interesting sight is the Nuraghe di Albucciu, the closest to Arzachena, which is unusual because of its granite roof as opposed to the typical conical tholos. What a terrific area! 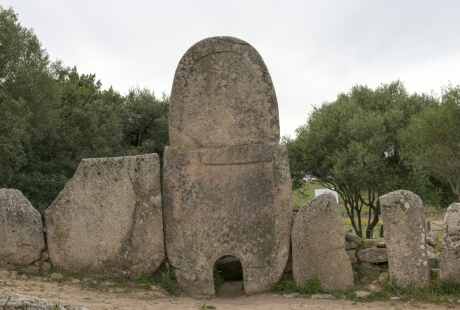 5. Move over Stonehenge: roll on the Tombs of the Giants

The Tombs of the Giants, or giant tombs, are exceptional archaeological sites that can be seen across the entire island. Coddu Ecchju, to the north of the island, is one of the most important, with a central standing stone, called stele, and two granite slabs with an engraving that may symbolise the entrance to the hereafter. Li Lolghi, in the same area, is staggering because of its high central standing stone that dominates the countryside from its hilltop place. Close to Nuoro, S’Ena e Thomes is a fine example of a Giant’s tomb: the rising granite slab rises isolated for what is an imposing sight. Li Mizzani is magical, as it sits on a plateau dominated by Mount Canu, a few kilometres from the sea, in the north Gallura area. And the list could go on: Coddu, Sa Mura, Maschiola, Sa Tanca ‘e S’Ozzastru… plan a road trip and discover all the mysterious, fascinating and enchanting historic surprises that this fabulous island has on offer

East of Oristano, the exceptional Mont ‘e Prama archaeological site has just recently revealed another two giant warriors of what is considered to be an army of intriguing, enigmatic and unique statues, dating back to 3,000 years ago. The vital role played by this site led to the creation of a Foundation, aimed at protecting these fragile and pivotal ruins. It’s work in progress in this spectacular corner of Sardinia: who knows how many exclusive treasures will see the light in the future?

Travel Tips where to stay:

Ask for more info about the best experiences and itinereraries we can design in the Dolomites, Lake Garda and beyond