Ten of the best experiences in Sardinia 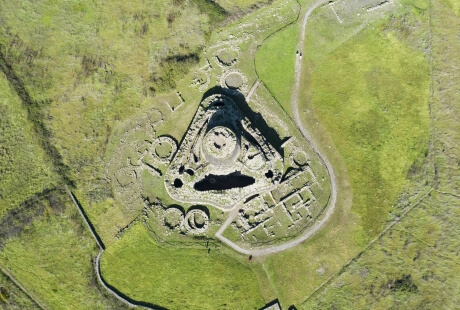 Unique and simply sublime, Sardinia is a revelation. A land of contrasts, pristine beaches and blue waters juxtaposed to wild canyons and lush, verdant landscapes.

Sardinia is bewildering when it comes to its archaeological sites, this marvellous island hides many secrets and we want to reveal some of them 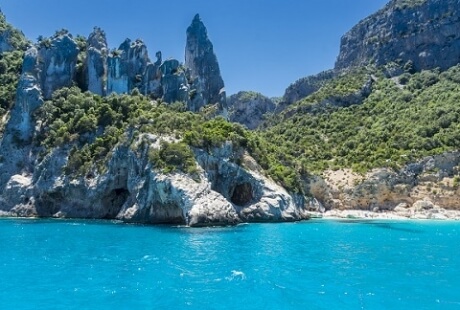 Unbelievably beautiful, this stretch on the eastern coast is replete with staggering beaches, high cliffs stretching on to the sea and a vast array of activities to suit all tastes. A national park since 1988, wildlife here floats on cloud nine, with mouflons, peregrine falcons, Sardinian foxes, weasels and seals being carefully looked after. You can practice any sport you could think of, from hiking to climbing, kayaking to cycling, naturals wondering being your trusted companions.

Visit Cala Luna once and its memory will stay with you forever, then scout the area by boat: the sheer beauty of Cala Gonone, Cala Mariolu, Cala Fuili and sensational Cala Goloritzè will take your breath away 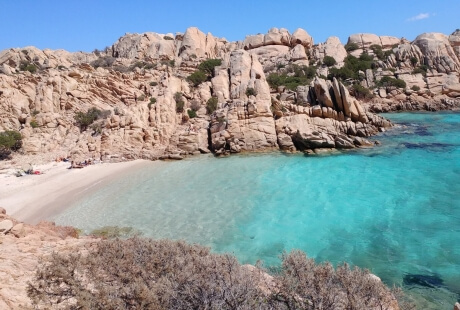 2. National parks of the north

Spanning the remote north-western tip and the glitzier north-west coast of Sardinia, two national parks grace the shores of this awe-inspiring island.  Established in 1997, the Parco Nazionale dell’Asinara can only be reached by boat with organised tours and is a haven for wildlife, with several albino donkeys – who give the name to the area – and 80 animal species living in harmony in superb setting, where tranquillity is sacred. Idyllic La Pelosa beach, south of the Asinara island, is a staggering oasis boasting white sand and a rugged rocks that conjure up images of the Caribbean.

Seven main islands make up the Parco Nazionale dell’Arcipelago della Maddalena, with appealing jewel-coloured waters and granite islets that have been shaped by the fierce Maestrale wind over the centuries, creating unusual, attractive shapes in the rock. Pink – granite La Maddalena island is superb: enjoy its sapphire waters and lovely seascape, among the cleanest in the Mediterranean, brimming with marine wildlife. 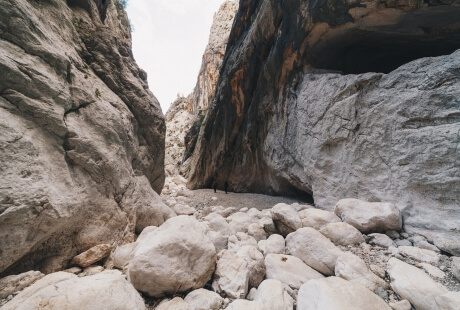 Sardinia’s most spectacular gorge, Gola Su Gorropu is Europe’s answer to the Grand Canyon. Located in the Supramonte area between Orgosolo and Urzulei, the force of the Rio Flumineddu stream shaped this 1,5km-long ravine over the centuries, running along 500-metre-high walls. Home to the endangered Aquilegia nuragica plant, mouflons and golden eagles can be spotted in this superlative natural setting. Covered with juniper trees and centuries-old juniper trees, you can admire Pischina Urtaddala, a pond where subterranean waters stream, along with deep sinkholes, caves and cliffs that make up a riveting display of unexpected marvels.

A precious gem of biodiversity, be fully equipped to walk its trails as the landscape encompasses challenging stretches of rocks in a spectacular setting that seems too good to be true. 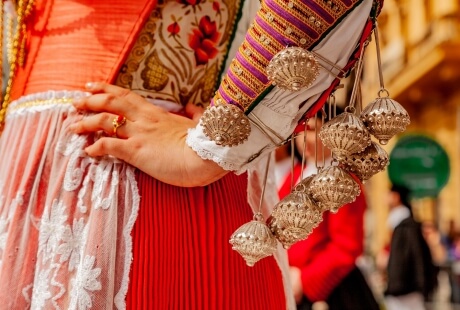 Sardinia’s authentic soul is revealed in its vast array of stunning traditional crafts, varying from textiles to ceramics, jewellery to wool carpets and shawls. Taking inspiration from everyday objects and the stark presence of the sea, imagine a world brimming with fantastic artefacts bearing centuries-old traditions. Find exceptional coral – the “red gold of the sea” – in Alghero, among the most prestigious in the Mediterranean; visit picture-postcard Bosa to see the production of the precious filet lace. The art of basket-weaving is aptly shown in the Museo dell’Intreccio in Castelsardo, north of Sassari, while Gallura is the home of cork, used to make all sort of objects, from chopping boards to decorative bowls; find pretty examples of ceramics glazed with colourful figures in Oristano and Sassari, while special pocket knives can be purchased in Arbus, to the southwest of the island. Do not leave without a fine piece of silver filigree jewellery (filigrana), exquisitely crafted in Cagliari, Alghero or Dorgali. 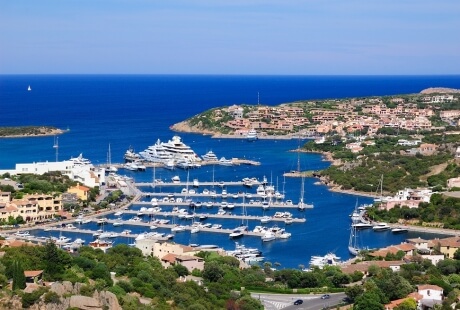 Sardinia is rugged coasts, wild interiors with unexpected lakes and lush vegetation, pristine beaches and nature reserves. It is also, however, the land of glitz and allure, Porto Cervo and Costa Smeralda being famous hotspots for the rich and famous. The area was developed in the 1960s thanks to a consortium led by Prince Karim Aga Khan, who employed exceptional architects to devise the dream-like place you see today. Porto Cervo offers the best marine facilities on the island and anyone who’s anyone docks a boat or yacht here; it also boasts stunning beaches such as Capriccioli, Spiaggia del Principe and Liscia Ruia.

Poltu Quatu, the “hidden harbour”, is an exclusive location with a pretty marina and delightful whitewashed houses. Due to its incredible natural beauty, the Mediterranean vegetation creating a magical bond with natural attractions, emerald waters emerging in full swing, Costa Smeralda ranks high in everyone’s wish-list and has featured in many a films, including a James Bond movie. 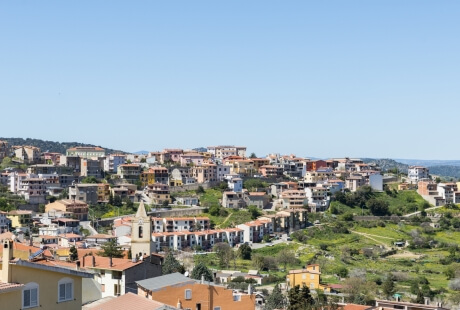 Emotionally-charged graffiti decorate the length and breadth of Orgosolo, a small town in Barbagia, abounding in colourful graffiti that recreate pivotal events of the 20th and 21st centuries. Banditry and violence now a distant past, the sheer vitality of the murals is in stark contrast with this tranquil mountain town a few kilometres from Nuoro, where the colourful paintings tell a story of traditions, culture and dissent.

Among Italy’s most famous villages, this is also the land of canto a tenore (polyphonic folk singing), which is now part of the UNESCO World Heritage. To the south of the town you can find Funtana Bona, the spring at the source of the Cedrino river, a magical river for kayaking and canoeing. 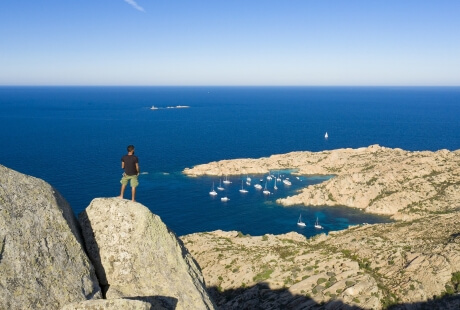 7. A dreamland for outdoor sports

The sea casts it spell in sensational Sardinia, but beyond beach perfections where swimming is a delight, you can take up a world of varying, interesting sports. Kayaking and scuba diving in crystalline waters are pure joy, along with surfing, kitesurfing and sailing.  Climbing here is a serious affair, with engaging, exposed routes guaranteeing exceptional views – the multi-pitch Cala Goloritzè or Hotel Supramonte in the Nuoro area being two renowned examples of the 1,000 routes; add 4,000 sport routes all over the island and you will be spoilt for choice, with Ulassai, the Orosei gulf, Capo Caccia and Domusnovas being the most famous areas. Hiking in the green mountainous interior or along fabulous stretches of coast is superb: the many trails cater for all abilities and you could even test your stamina with the exceptional, wild Selvaggio Blu, among Europe’s most challenging routes, along Gallura’s spectacular granite rocks or history-rich Sulcis Iglesiente.

If cycling is your credo, you have found your Eden: it’s road cycling paradise with the Tour of North Sardinia from Alghero to Olbia, Epic Sardinia from Cagliari to Arbatax and the Max Leopold Wagner Tour in the south being mere examples of the many routes you could follow. If you are into mountain bikes, choose the Transardinia to explore the length of the island in an exciting adventure via forests, gorges, panoramic trails and challenging ascents. Do not forget horse riding: explore remote inland places or ride on the beach for a most evocative experience in close contact with nature. 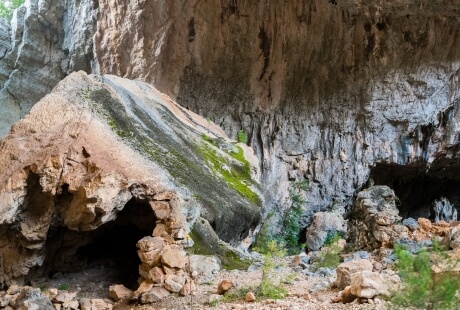 In a region replete with archaeological finds, the mysterious Nuragic village of Tiscali, deep in the heart of the Supramonte, has bewildered historians ever since its discovery in the late 19th century. Built along the walls of a depression in the Bronze Age as a defensive town, it is made up by three different villages, put together at different times. You can only see it once you walk an arduous two-hour trail, but the effort will be worth it: you will be met with a remarkable sight, perhaps one of the most unexpected in Sardinia. Holm oaks surround stone foundations and create a magical atmosphere that defies the test of times. Make sure you explore the surrounding Lanaitto valley, as well, including Sa Sedda ‘e Sos Carros, dedicated to the cult of water, and the Corbeddu cave, where a 5,000 year old queen was found

An experience you will not easily forget. 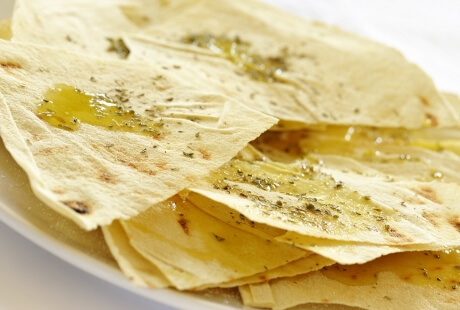 The marvellous landscapes and unique treasures you will find dotted around the island are echoed by sensational culinary traditions that nourish the soul. The Sardinian kitchen relies on local produce such as cheese, meat and fish, but do not expect anything other than extraordinary. Farm-raised lamb and sun-ripened olives or tomatoes eaten with pane carasau, fresh pecorino cheese sweetened by the most delicious local Asfodelo honey you could think of: everything here is done with heart and passion, be it one of the twenty-odd types of homemade bread, the six types of honey in the Oliena region or pungent, aromatic olive oil, to name a few examples. Filled, home-made pasta like malloreddus or culurgiones can be followed by a typical porceddu (pig) or capretto (young goat), seasoned with scented Mediterranean herbs, or tasty lobster, mullet and tuna, along with other types of shellfish. Finish off with delicious biscuits or cheesecake-like pardulas or seadas for a memorable meal. Wine is also a strongpoint on the island, Cannonau reds and Vermentino whites being the most celebrated varieties, that make the island famous well beyond the national borders - and that stands to reason 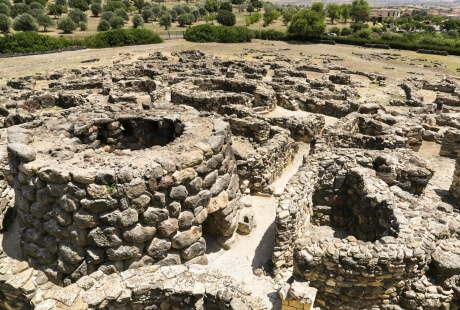 10. A stunning archaeological past

Sardinia is bewildering when it comes to its archaeological sites. The exact function of its 7,000 nuraghi, in particular, still has to be determined: what is known about this Bronze Age population is that it was made up by shepherds and farmers. The entire island is dotted with many examples of this stunning architecture, the most famous being Su Nuraxi in Barumini, a UNESCO World Heritage Site in the south, Is Paras in Isili, south center of the island, where a nuraghe boasts a 12-metre-high vault, Sedilo, close to Nuoro, hosting the Giant’s Tombs and one of the biggest necropolis on the island, the Domus de Janas di Ilois, with 34 tombs.

Santu Antine Nuraghe is the main type of ancient megalithic edifice found in Sardinia. This construction is characterised by circular defensive towers-fortresses in the form of truncated cones built of dressed stone for which no parallel exists anywhere else in the world. The Nuragic civilization began in the Bronze Age (1800 BC), as the evolution of pre-existing cultures present on the island of Sardinia since Neolithic times. The Nuragic villages of Santa Cadrina to the north-west, Genna Maria to the south, one km from Villanovaforru or Serra Orrios, in the Dorgali area, the village of Romanzesu in Bitti, the sacred source of Su Tempiesu in Orune, area instances of a mysterious past that makes this fabulous island an intriguing, delightful, mesmerizing destination.

Travel Tips where to stay